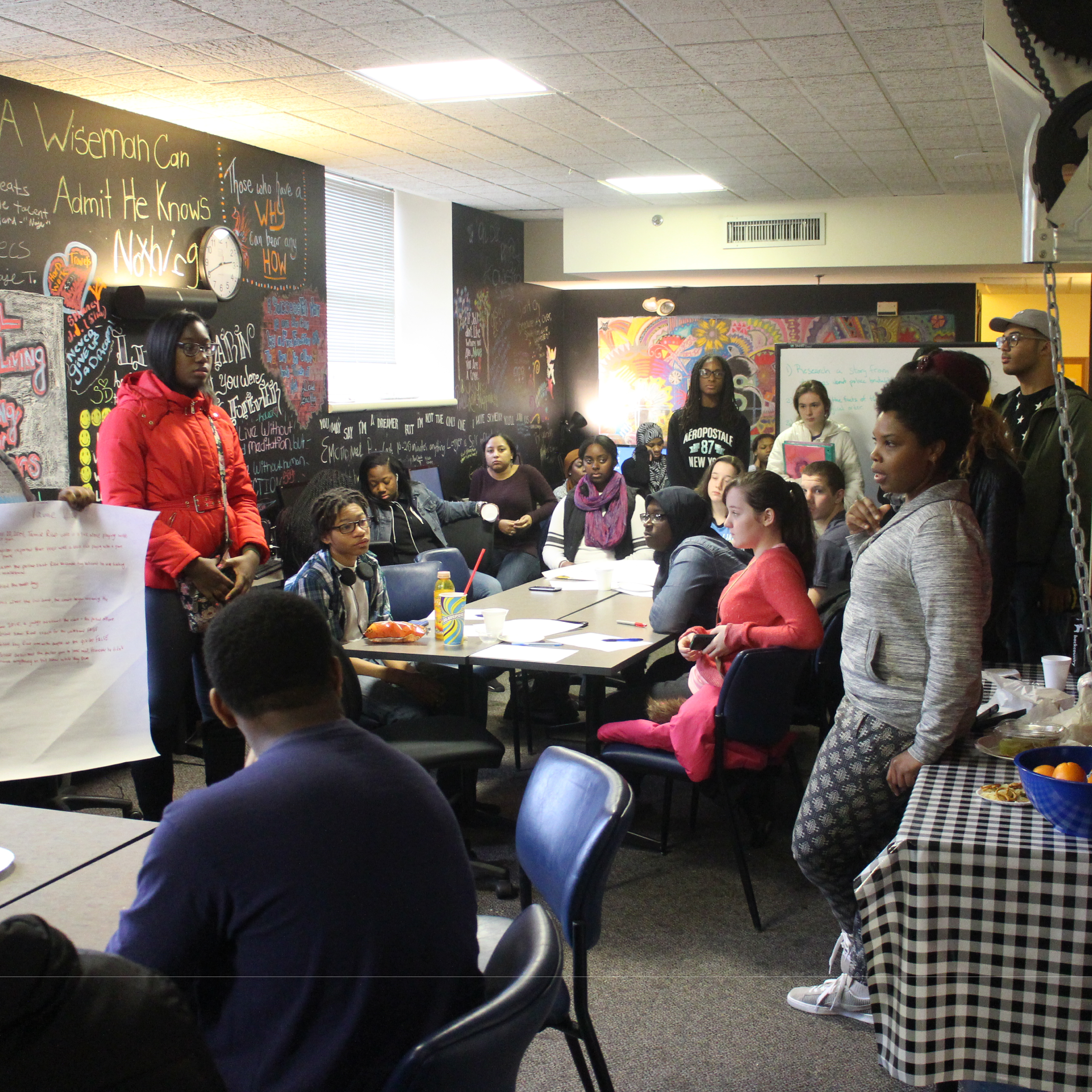 We are pleased to officially announce that Arley Styer, MSS, MLSP, has been named chief of programs.

In this role, Arley will lead the integration and implementation of ECS’ new Path to Prosperity Model across all programs. With more than 10 years’ experience in human services, Arley most recently served as ECS’ director of youth and workforce development initiatives, where she introduced and oversaw various workforce development programs.

In her new office digs, we sat down with Arley to hear her perspective on the state of the agency, her new role, and life in general.

In one sentence, how would you describe ECS’ new approach to our work and the Prosperity Model?
With The Path to Prosperity Model, what we’re doing is partnering with participants in a new way to create opportunities for them to achieve their goals and economic independence.

What excites you most about your role in this work?
I’m excited that we’re offering more long-term solutions for people versus the “you have an issue and I have a solution” approach … the whole vicious cycle of patching people up, so to speak. Being born and raised in Philly, having the opportunity to do something that could really have an impact in this city and its residents is important to me.

So civic engagement plays a big role in your life?
Absolutely. Growing up, my parents were activists and very involved in the community. My dad started an anti-drug organization that worked to get neighbors involved in decreasing drug sales on our street. Whether it was for his organization or other local issues, I attended marches and community meetings from a very young age. The importance of being civically-engaged was instilled upon me.

When did you realize you wanted to become a social worker?
I always knew I wanted to help people, but I didn’t know what that would look like until after I graduated college. I was actually undeclared for most of my undergraduate career. I was a Biology major, then Spanish before settling in on Sociology. I completed my study abroad program in Spain, and afterward, I thought I was going to go into healthcare as a bilingual practitioner.  When I realized that social work weaved together helping people, influencing policy, and community activism, I knew it was for me. I then went on to earn a Master of Social Service and a Master of Law and Social Policy from the Bryn Mawr Graduate School of Social Work and Social Research.

You studied abroad and I understand you recently took a trip to Thailand. Any upcoming trips?
I’m going to Morocco and Spain in the fall.

Fun! How’d you catch the travel bug?
When I began traveling, I realized that it gave me both grounding and inspiration.  Exposure to the different ways people live their lives gives an appreciation for how similar we all are. Regardless of the things we experience, our nationality, our race, or socioeconomic class, what makes us common is our humanity. It is so important to focus on that, especially when things don’t necessarily seem to be going the way you want them to in life.

Being “called to serve” is a common expression around ECS. What calls you to serve?
What’s missing for a lot of people, especially those in need, is an ally—somebody who can understand them and offer them support. Being relatable and down-to-earth is important to me. As someone who had allies who supported me every step of the way in life, being able to relate to people and be an ally to them is what I have to offer.

How long have you been with ECS, and what are you most proud of so far?
Four years. And since I’ve been here, ECS has continuously evolved. I’m proud to have been a part of that. But what I’m probably most proud of is getting ECS in the workforce development space for young people.

And now you’ll build the Prosperity Model and Opportunity Development Department from the ground up. What do you look forward to in that?
I’m looking forward to ECS programs working more closely together and more collaboratively than ever before for the benefit of our participants. This department, in particular, is going to provide the structure that’ll allow us to do that. And the fact that this is a new way in general for multi-service agencies to approach their work is really cool. We’re going to show other social service agencies that it can be done! [Click here to see job openings in our Opportunity Development Department and more.]

Last question. Much of your work has been with youth and workforce development training. If you were to give one piece of advice to an aspiring young person—or anybody, for that matter—what would it be?
People often pursue things based on the formation of their identity—which a lot of times is not formed by themselves as much as it is by external factors. So to them, I would say: Whatever it is that you want to do in life, declare it for yourself and create it. Don’t limit yourself based on a false perception of your identity, or what you’ve been told, or where you grew up, or what the media, or statistics, or whatever say about you. Figure yourself out for yourself, who you really are, and just go for it.