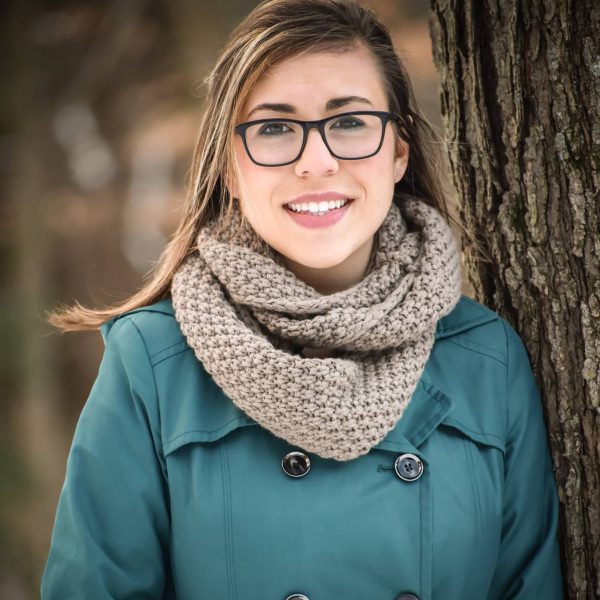 Growing up in South Jersey and coming from a large, extended family (including one brother, one sister, eight aunts, two uncles and a bevy of cousins) Kathleen Poliski says she never lacked for social support.

“My whole family has always been super supportive with everything I do,” says Kathleen. “When I tell them that ‘I want to do this,’ their typical response is: ‘Yeah, you’ll do it.’”

That kind of confidence comes in handy. Especially when you’re planning something that at first glance might look almost impossible.

Kathleen lives a busy life. By day she’s a video production specialist at Thomas Jefferson University Hospital. By night she’s working on her Master’s Degree in Mass Communications. She’s also a freelance video producer. And musician. And songwriter. And most importantly, a volunteer with Episcopal Community Services (ECS).

Kathleen’s involvement began when she responded to an ECS call for volunteers who were willing to visit with an elderly ECS client once or twice a week, reading to them, maybe cooking or sharing a meal, and generally spending time with them.

That’s how she came to meet Norman.

Getting to Know Norman

“Norman is a caring, hilarious and sweet 66-year-old blind man who lives in Philadelphia,” not far from where she works, Kathleen says.

According to Kathleen, Norman is quite an impressive character. Norman was born premature with no vision in his right eye and the only one survivor among triplets. As a child and into his early adulthood in West Philadelphia he was able to navigate using what little vision he had in his left eye.

Despite his visual impairment, Norman earned an Associate’s Degree in Arts & Sciences from the Community College of Philadelphia, band briefly worked for the Philadelphia Center for the Blind and Visually Impaired, and then for the United States Postal Office. Eventually he landed a job at Yellowbook where he spent the next 34 years. It was during his time at Yellowbook that Norman went completely blind. But he still managed to make his normal commute to and from his job by bus, two hours each way.

Despite all those challenges, Norman is a friendly, happy, outgoing individual who tries to live life to the fullest. According to Kathleen, he’s an excellent cook, plays a number of instruments, and has taught himself several languages.

Inklings of a Plan

Norman’s interest in languages came early. Growing up in West Philadelphia, he remembers hearing his neighbors speaking Italian outside his house. From that auspicious start, Norman developed a love of Italian culture – the language, cooking, classical music, and an occasional glass of red wine.

Perhaps it’s not surprising, then, that when Kathleen asked Norman if he ever dreamed of going anyplace in particular, his quick response was “Italy.”

To Norman, such a trip might have seemed a proverbial pipe dream. But Kathleen saw it as way to make a positive and very personal impact. But how to raise the kind of money such a trip would require?

“I had to think about it first,” says Kathleen. “But then it occurred to me – I have the tools and the skills to make this dream happen for Norman. And if I don’t do it, who else will?”

The centerpiece for her fundraising effort was a “Let's Get Norman To Italy" campaign that Kathleen, along with her friend and colleague Skyler Jenkins, launched on the international crowdfunding website Indiegogo, along with supporting social media efforts undertaken via Facebook and Instagram (using the hashtag #LetsGetNormanToItaly).

The ultimate goal is to provide Norman with his life-long dream – a six-day trip to Rome in time for his 67th birthday, which is April 26, 2018.

As part of the overall project, Kathleen and her fellow video producer Skyler are producing a video documentary titled This is Norman, that will give an inside look of Norman’s day to day life as a blind man in the city and encourage Norman to go outside of his comfort zone – while inspiring others to do the same

“Getting to know Norman has been a real inspiration,” Kathleen says. “His story is reminder that anything is possible no matter what life throws at you. We hope that getting to know Norman through the documentary will help people gain a new perspective about what it's like to be blind – and also prove that friendship has no age limit.”

“I’m so glad I went with my gut on this project,” Kathleen says. “For me, it’s helped reinforce the idea that anything is possible, you just have to work hard to get it.”